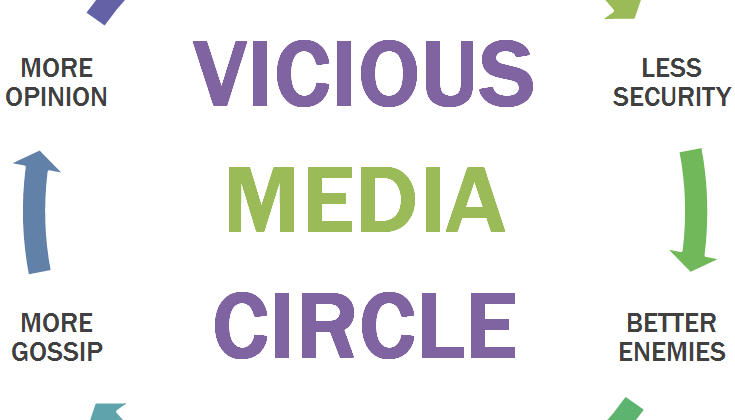 Are we trapped in the vicious circle?

Or: How to destroy the trust in journalism in 8 steps.
Step 8 will make you worry.

What do you do if you lose your job as an editor? You can try working as a freelancer where you will get low wages. Or you can be hired as a well-paid public relations manager – an option many journalists chose (some because they have to).
But: PR should be the natural opponent of journalism. While companies only tell one side (the good side) of the story, one of our tasks as journalists is to discover and tell all sides there are. Sometimes this means to display two sides, sometimes there are five perspectives and sometimes it is only one. But there are more and more people working in PR nowadays. And since companies pay much better than publishing houses, they often hire good journalists.

–> It’s all about earning money.

–> It’s all about self-marketing. Welcome to “Meconomy”.

I don’t have any numbers for that, but in my opinion media ethics became less important. We just feed the people with the content they want. We don’t care about whether it’s healthy or not. So we only give them junk food.

Example: In my studies at university, we would only talk about media ethics once in four years.

Gossip, sensationalism and lifestyle generate many clicks. Beautiful woman on the cover help to sell more newspapers. Entertaining and emotional stories get more likes and shares on social media. Football is the new “bread and circuses” for the 21th century. Young people are less interested in politics and more interested in Netflix. Journalism suddenly has to compete against the entertainment industry and show business.

–> It’s all about getting the attention of young readers – in order to display ads or to collect and sell our data. Attention is the new currency on the web.

The truth doesn’t matter anymore. It matters what people and journalists think. Some journalists argue that facts are the new truth (since there might be no absolute truth). But even facts can lie. The trend leads to opinion becoming more important than truth (it is easier, cheaper, faster and less dangerous to get!): Opinion > Truth. The next step might be that the opinion of the majority becomes the truth: Opinion = Truth.

Instead we should focus on objective journalism – even though we can never reach a hundred percent objectivity in journalism, we should always strive for the truth.

–> It’s all about saving time and money. Opinion is cheaper (than truth).

(What “quality” means, depends on how you define “quality”)

In Germany we say it’s impossible to define “quality” in journalism. But more and more people sense that the quality of journalism decreases. Nowadays we have to be faster, faster, faster – at the cost of quality. This is also true for the costs: Everything has to be cheaper, cheaper, cheaper – at the cost of quality. But with less quality people lose trust in journalism. And trust is the true currency of how the media business model works. Without trust in an independent and reliable journalism there is no reason left to spend money for our products. This means that finding a sustainable business model will become even more difficult.

–> To sum it up: Without trust there is no more working business model.